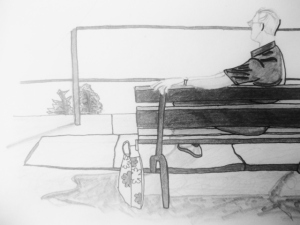 As the day passes before you, you sit longer than you had planned

on the most servant park bench.

Then, subtly, a lost shadow whispers into your ear, It says, shame about the

cats and dogs. You haven’t the heart to tell it that it hasn’t rained for days.

Meanwhile, time must be folding inward; squeezing itself until a residue from

a meaningful downpour leaps from your chin.

You remain seated on the bench getting wet, and as you do, you’re

unknowingly and repeatedly shapeshifting; into every person who has ever sat

there for exactly the same reason you do.

The blues will and always remain to be blue.

And so, yours to you maybe/always darker,

but at least mine are mine and blueish blue,

not nearly seen to be true — just felt.

Just believe me when I say I have the blues.

Sometimes, I see life replicated within the capacity of a retro 48k

computer; the colour clash — together with the UV light from the sunniest day

The very most splendid train service,

As it goes deeper underground,

accidentally switching to another line,

it stumbles across secret stations,

And now the return service is not so good.

When I walk on the pavements that knit together my small town, I occasionally hover, fleetingly and quite randomly above the colourless concrete.

Recently, I stood still behind a tree and measured approximately one centimetre of nothing between my feet and the inevitable, and for those seconds I did not wonder how, all I asked was… why? Until, my feet felt firmly on the ground.

“Really” Says Man B, with a dry tone of derision.

Man A in his anger, “You look just like me; my double!”

Man B in his shield, “You’re beginning to crumble,

Man A replies, “You look sad being alone in a field,

I’m gonna burst your bubble, you’re coming with me,

II teach you to man up, live your life and be happy.”

Man B had now gone and Man A was just a man,

Jon White was alone in his bed sleeping; his only support was his new memory foamed mattress. At 3.05 he awoke with urgency, needing the bathroom.  He hadn’t yet seen, encountered, the heart pulsating shock, which was; the dark figure standing, facing the opposing wall.

A totem in the blackness, she stood in the centre of the room; silent, motionless with no acknowledgement of her surroundings. Jon’s only thought was for the sweet blessed relief he would feel in the bathroom.

He grabbed his duvet and purposefully flung it away from his tepid body. Now, exposed to the arctic impression of the bedroom, the atmosphere in the room sent Jon’s skin temperature to plummet; tightening around his bony adolescent frame like an invasion. With his skin no longer flexible and encasing, Jon not only felt the harsh cold but increasingly ill, only once before had he felt this sick; when he was witness to his father’s death. 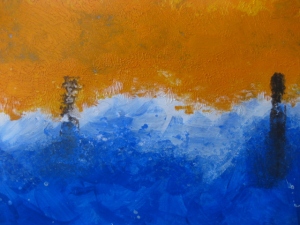 In a shimmering sea lies creation,

a wrecked city, a lost at sea population.

Provisionally, some strangers are made king,

so long as the shore-wind that follows does sing.

Now I can daydream considerably longer,

as I become the tide, I arrive stronger.

In a lost world, without soil or land,

many sandcastles are formed without their sand.

Then I see an overhead sign in neon magenta,

A merman’s place but as man-made as a moat,

now is the time if on dry ground I shall float.

And to scribble from the teeth of a shark,

keep your mouth shut and leave before dark!