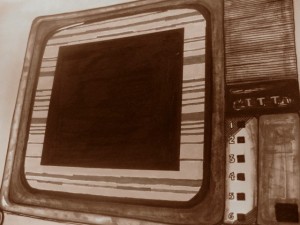 Logi stood in line with the fake TV over his head. The intro music began; his heart, trying to break free from where it was lodged; decaying in his throat.

The fact that he couldn’t see or hear clearly was edging Logi ever closer to an unlikely case of spontaneous combustion.

The on-looking Snoxall pointed Logi out of the room, appearing briefly as a human signpost; he had seen enough and heard little that pleased him.

In the evening, Snoxall sat at home, as usual. He sat, hard as granite, in front of the TV, as usual. He gauged himself; spooned microwaved additives through a small entry and exit hole in his face, as usual.

And, as usual, his eyes were stinging everything like angry wasps. Snoxall was bloated; full of repeats.

Repeatedly, throughout the years, Logi’s TV had become portable. It was apparent to him that at many segments of his life, this box, lowered, over his head; a televised helmet that added doctrine to his fear.

Logi’s portable TV screen always flickered, both inside and out. The re-formed, distorted face of Snoxall morphed seamlessly into Boygall. Boygall then became Bagnall, then Logi’s own aging face.

This continued till his eyes fixed, his mind went blank. And his mind always stayed blank. Until, one moment of release allowed him, slowly, to grasp at his own personal and portable TV’s remote control; Logi could now pause anything and everything he wanted to with a…click!

When the world was freeze-framed, Logi took his TV off his head and walked serenely through the army of real life actors. Occasionally he’d walk around his statuesque foe and look into their fixed eyes (looking for life). He’d then become an extra to his own play as soon as he pressed play on his remote control. And at moments like these, Logi would be instantly forgotten. His portable TV screen faded to black…click.